skip to main | skip to sidebar

Anyone seen the glute? 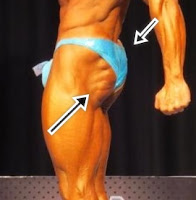 What do the 2 pictures have in common? Both are endangered species but one lives in Africa and one used to live in the back of your trousers. The poor glute has been hunted to extinction by sitting down, taking the lift/escalator, partial squats, lack of sprinting or weight training and general lack of activity. Now, just like a multi-storey car park being built on the land that the red eared nose spotted monkey used to live on, low slung, ill fitting jeans have moved in where the poor glute used to live. 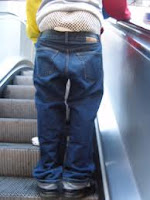 The fella above actually has some glutes. It is unfortunate that his trousers are trying to squeeze the hell out of them. The reason why people can carry off the fashion wear above is because we don't use the glutes for their proper function. Have you ever seen someone wearing the low slung trousers run, climb the stairs or squat?? They immediately have to adjust their trousers as their glutes are fighting for their survival.

With all seriousness, the glutes are an integral part of the human body. If there was one muscle I wouldn't want to lose (this isn't a chapter from 50 shades ladies) it would be my glutes. So i'm doing a glute awareness week next week on my Facebook page which I will convert to a blog. It will be exercises and tips to prevent your glutes from becoming an endangered specie. If it does, you will probably be paying a physio a lot of money when you get older, but more of this next week.

Long live the glute!
Posted by Coach Chris at 07:58