skip to main | skip to sidebar

Another year of Wimbledon has passed by and I tried to watch as much as I could. Unfortunately, my children didn't appreciate Daddy monopolising the T.V. to watch people hit a ball backwards and forwards to each other for hours on end. So I only caught glimpses.

Serena Williams won her 6th Wimbledon title and her second Serena slam at the age of 33. Kudos to her and let her enjoy the praise and glory. However, when the picture below was published, some people decided to comment on how masculine she looked. This brought about a rather witty response from J K Rowling. 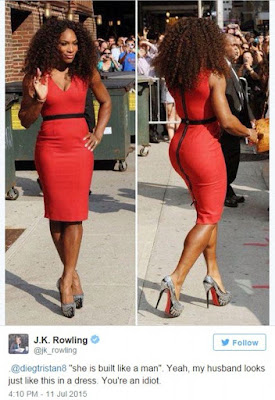 As sad and as dumb as some people are, I thought this would be an opportunity to explain why this guy is a moron and to shut this discussion down once and for all. I'll also show how these kinds of morons are unwittingly attracted to men, despite being heterosexual.

Back to Serena. The only reason people may think she looks masculine is mainly cultural. We don't see women with muscle. It's the same when we see a person over 40 who is muscular or lean. We think there is something wrong with this picture. Personally, this is a regression in us as a species and we shouldn't we lauding this as the new 'norm.' However, when I look at Serena, her body fat levels are at a guess in the normal ranges for women (10-30%). She looks like she can build muscle better than other women (which is true for a lot of athletes). Even you would build some muscle if you played sport for 8 hours a day.

If you showed this to black males, or those who live in Africa or the Caribbean, they would think she was slim. What I find funny is if Serena didn't exercise, she would be slightly softer and would carry more bodyfat. She might even be classed as overweight. So people need to stop comparing her to Maria Sharapova (who has male characteristics despite many men finding her attractive) and they should compare her to a bigger version of herself. However, I doubt they would be wearing a dress like she is and this conversation wouldn't be happening.


Find out more about Chris and Fit School.